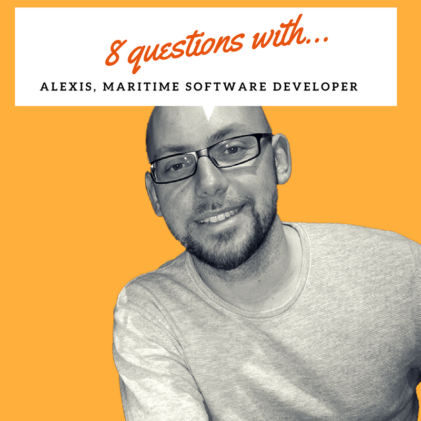 How long have you been working at TGI ? What do you do ?

I am a developer and I’m working on MARCO, it’s a financial analysis software and a decisions support system for stevedores and consignees.

What are the qualities required to be a developer ?

Being a good developer needs rigour and curiosity ! Computer science continually changes. It’s important to be aware of the latest developments. At TGI, adaptability is necesseray because we can work on different products.

What motivates you in your job ?

It’s this continuous technological watch wanted by our job and the necessity to be an autodidact. It’s essential to improve over and over, to keep an eye on new technologies and development techniques.

What is MARCO’s driving force ?

MARCO contributes to optimize terminals’ performance and productivity. Among its multiple functions, the software allows the access to a global view of the internal and external handling costs, and thus establish a margin on operations. Another strength is the interfacing with OSCAR, TOS for container and roro terminals.

What is TGI’s driving force ?

We do propose Software Package and we are also able to configure and customize them to the exact requirements of our customers.

What are your hobbies ?

Jogging ! I did a competition with my manager Florent a little while ago. I’m also thinking about doing scuba diving again. Currently, I am at level 2, it is the first level allowing to dive indepently.

If you had to chose a mentor, anyone, who would it be and why ?

Linus Thorvald, he created the most prominent and the most used open OS : « Linux » and also the Subsurface software that plans dives. He is an emblematic figure in the free software’s world.

What is you favourite quote ?

« Tomorrow is another day ».